Yes it really is, the election calendar for the federal election dictates that the Thanksgiving long weekend is when the four days of of Advanced Polls will happen.  Mark October 11thto 14thas your opportunity to vote before you sit down to have your Thanksgiving Turkey, Ham or Turducken (Turkey-Duck-Chicken) for dinner.

My Thanksgiving Long weekend will be anything but a weekend to eat and then collapse on the sofa, but I am all good with that.  So really this Labour Day Weekend is the last long weekend I can enjoy with a coffee and a newspaper, my book with my feet up and a chance to really sit back relax and breathe in the air of the last of the summer days as the autumn evenings start to creep in.  The next long weekend won’t happen until the Dalton McGuinty Long weekend, also known as the Family Day long weekend (which oddly enough not everone gets to have with their family) in February.

I hope you’ll excuse me as I wrap this up now and think about how to spend my Family Day long weekend…oh wait…I won’t be able to because in Ontario Family Day isn’t given to ‘federally regulated’ employees.  At least I’ll still have Easter Weekend to dream about.

I have a TO DO list, infact I have several.  These lists are like family trees, as famiIies grow, branches are added. My list has several branches and those branches never disappear they just grow,

My current list has 13 items on it, but on those items there are branches. Campaigns are like fertilizer for a TO DO list.  What starts with get an office then morphs into get furniture, phones, internet, divide the space for phonebanking, sign preparation and have a reception area set up. That reception area must be the first desk that has a phone.  My signs TO DO list has by-laws, materials, pick-up trucks, find missing post pounders and bug spray as branches.  The branches on my TO DO list have branches.

For every item I can cross off I add at least five more.  The odds of me surviving the list are astronomical, they are out of this world.  The only thing that makes me get through the list is delegation.  Delegation then creates a new tree of a TO DO list, that list belongs to someone else BUT its roots belong to me.

At a certain point in the campaign, long before the we finish planning our election day TO DO list I will have started a campaign office closing TO DO list. Elections are all about TO DO and not HAVE DONE. Even today we talked about the closure of the 2015 camapign and how effective that TO DO list was (it was a good TO DO list).

Thank you for reading this post; to catch all my posts and be notified as new ones come up please follow me on WordPress.  I can be found on Twitter@robertdekker& @rdmediaottawaand on Facebook athttp://tiny.cc/n5l97.  If you prefer email, please contact me at rdmedia@bell.net

There is nothing like a blank open space into which a campaign office can be designed. 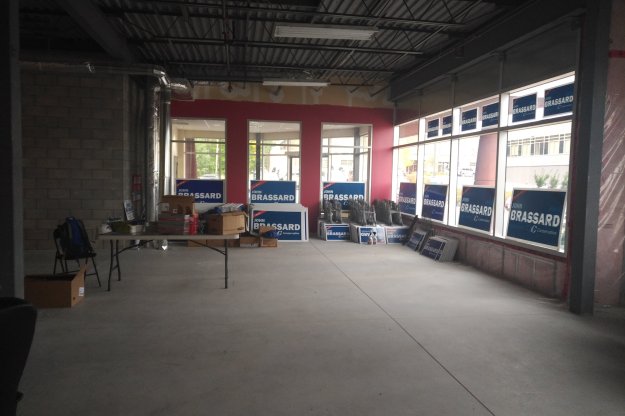 I have seen some spectactular campaign offices, in 2008 when Brian McGarry, the Conservative Candidate in Ottawa Centre the old School Board offices/school building on Gilmour street served as his HQ.  The whole building was not used, many offices were utilized, but the hidden gem was the auditorium.  The “Aud” could house a few hundred people and had a beautiful stage.  It was used for a local rallys in 2008 and a couple of larger campaign events.  I have never seen any office since have anything like that space.

The campaign office is defined by the space available.  In the Ontario election last year Colleen McCleery had a beautiful home for an office.  It was a 2 story structure with a big basement.  Most activities were restricted to three large rooms on the main floor for sign storage, greeting space and a room for a few people to make phone calls and prepare for election day.  It was as homey and friendly as the campaign atmosphere was.

Each space has it benefits and its challenges.

This year I’ve the oppportunity to open two campaign offices.  Both spaces were leased before I arrived, and a campaign office was created out of each space.  In Orleans, for David Bertschi the campaign took over an old paint store.  When we arrived we found a rainbow of biege, ‘blah’ blue and purple on the walls.  With some paint, blue and white of course, the office was transformed – the fresh colours added energy to the space!

Moving to the new space in Barrie-Innisfil, the office is a ‘shell’ of an office.  Drywall and cynberblock are the décor.  Being stripped of any décor means that there isn’t much that would be damaged. On the plus side though there is plenty of natural light!

Every Campaign Manager has their own touches that they like to see or not see. I don’t like clutter. A campaign office has a limited time of use, clutter derails any effectiveness in the office.  I am also a huge advocate of the campaign calendar on the wall, and I mean ON THE ENTIRE WALL.  It’s a countdown to election day and it is the campaign at a glance – canvass times, meetings, voting days, events, debates and media time are all documented.  The calendar is a sign of accountability for the campaign.    If it’s on the calendar it’s important!

Our campaign office will be as plastic and waste free as possible, we’ll use water jugs and ask everyone to use personal refillable water bottles.  The same will be in place for coffee and tea, we’ll ask everyone to bring a mug or cup.  Just because the office is operational for a short periodof time doesn’t mean we become lazy when it comes to the amount of waste in the office.

The Barrie-Innisfil campaign office is in transition –  a work in progress, with many pieces needed to make it functional for the many that have different tasks to perform.  While  a campaign office is really only a temporary home, it is still a home that needs to be welcoming, functional and efficient.

Sadly, on October 22nd, we just take it all apart and await the next election to do it all again.

It’s 9am and I’m on Train 51 heading to Toronto and then north to Barrie Ontario.  This is my frst foray into leaving home to campaign.  All my previous campaigns, going back to the 2004 federal election have been local.  This election has me heading to the riding of Barrie-Innisfil to work with MP John Brassard, who I have been working with in Ottawa for three years, to secure his return to Ottawa after the October 21stelection.

This is not the only electioneering I’ve been doing though.

For the past 11 weeks I’ve been busy working with the Conservative candidate in the east end Ottawa riding of Orleans, David Bertschi.  David is a great candidate he works hard and goes non-stop; he has a dedictaed and hard working team with him.  Following his nomination win I worked with David and his team to set up a campaign structure, a strategy and bring in people I knew David Bertschi would like and trust to help him win and become the the next Mamber of Parliament of that riding.

I learn something from every election team I work with.  Previously, as a candidate in 2011 and 2104, I learned to listen to everyone and to turn a discussion around and present a new point of view.  As I campaign worker I took in what people were doing, watching and learning strategies.  I would learn to disect the end result and determine what led to a campaign’s success or failure.  And as a Campaign Manager I took the lessons I learned from being a campaign worker and candidate to bring a perspective that I would hope benefited the team I was leading.

I faced a new experience this summer, coming into a campaign as an ourtsider.  Oh, I knew the key people in the riding of Orleans, but I lacked the riding knowledge that everyone had.  I used their knowledge to lead me through ideas and strategies that would be put in place.  My experience as candidate really helped, I was relying on the team to teach me the what worked and what didn’t work.  After 10 weeks, I was happy with what was done to establish a team working towards one goal, winning.

I was proud of the people that came forward, listened to the plan and put their spin on what it would take to make Orleans a Conservative riding.  While I am heading to Barrie, Orleans will be a special place for me, there are great people there and I was really happy to be a part of that team for the summer.  The lessons learned in Orleans will be used in Barrie-Innisfil.

Now onto a new experience, again leading a team where I am the outsider but leading a team that has an incumbent.  This is definitely different from trying to unseat current MP, or take a riding back, this is a re-election campaign.  The dynamics are new, I know John Brassard, as the candidate, has a way of doing things – I’ve seen it for the past three years.  It will be about using all three experiences I’ve had and lead his team for the next 53 days until election day October 21st.

I hope you’ll follow my journey over the next few weeks as I share #elxn43.  This won’t be so much about the politics of the election, but the people, experience and the education I’ll have.

Thank you for reading this post; to catch all my posts and be notified as new ones come up please follow me on WordPress.  I can be found on Twitter @robertdekker & @rdmediaottawa and on Facebook athttp://tiny.cc/n5l97.  If you prefer email, please contact me at rdmedia@bell.net