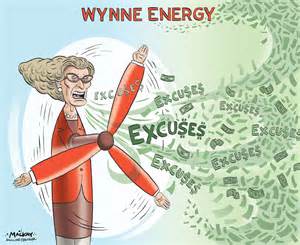 25%, that’s the answer from Premier Kathleen Wynne and the Ontario Liberals. Mired with a personal approval rating of 11% (as of 01/03/2017) the Premier announced a further reduction in the electricity bills of 17% this summer (after an 8% reduction that was set January 1st) as way to avoid the knives that would cut her and the Liberals out of government in the on 2018 Ontario General election. In the announcement, Wynne also stated that following the summer reduction in rates, increases will be tied to the annual rate of inflation.

Rates are currently frozen between November 1 2016 and May 1 2017 and tradition shows that previously approved rates go up on May 1st. So a question: with a reduction coming in the summer, will the 17% rate reduction have to take in any increase that may come on the first of May?

With this “olive branch” from the government, there are so many questions and so few answers.

I recently attended a meeting about Hydro costs hosted by Nepean-Carleton PC MPP Lisa Macleod; it featured a presentation by Peter Gallant from Wind Concerns Ontario. Mr. Gallant went behind the line items and presented what was represented on each line. There is so much more behind your electricity bill than just a box that says please pay this amount.

It will come as no surprise that your monthly bill is political. Political in such that choices are made in how the bill is written to make it seem that you should feel good about the fees you pay, right down to the final line of your statement indicating how much you saved on electricity because of reductions and time of use savings (I hope that makes you feel better).

Then there are the acronyms! My goodness, the number of acronyms that are used is mind-blowing. LDC, NUG, OPG, RPP, TOU, FIT and MicroFIT, GA, the list goes on.

My take away from the session was that producing hydro is burdened with levels of debt payment and delivery fees. But also that green energy, the McGuinty Green Energy Program, is going to burden Ontario Taxpayers for years as FIT (Feed in Tariff) contracts guarantee fees paid to generators that are up to 6 times more than what we currently pay for its use. The difference, and the bulk of what we pay, lies in the delivery and renewal generation connection charges created to bring in the revenue that time of use electricity rates cannot for the creation of wind and solar energy in Ontario.

The announcement by Wynne and Energy Minister Thibeault is going to push paying for contracts, repairs and expensive energy generation through to the next two generations or more. By only allowing rate of inflation increases for the next four years, debt payments of billions are being delayed, increasing the provincial debt further and increasing debt financing payments closer to the top the expense sheet of the province.

Prior to the announcement from the government, the NDP pledged to cut electricity rates by 30%. No word on how to do it, but just to cut rates by a third.

So now of course, Ontarians want to know how the Brown led PC’s will challenge the Liberals ‘reduce and almost freeze’ plan. MPP Macleod told those at her meeting that there will be a response, but it will be thought out (unlike the NDP plan?) and a workable plan to provide affordable electricity for Ontario.

We’ll have to wait, but I hope that the plan will include a dash reality, acknowledging what path Ontario has been led down by the McGuinty-Wynne Green Energy Coalition.

Thank you for reading this post; to catch all my posts and be notified as new ones come up please follow me on WordPress. You can also see me on www.redheartbluelife.wordpress.com where I am celebrating #Canada150 with a daily post of an event celebrating our sesquicentennial in Canada.